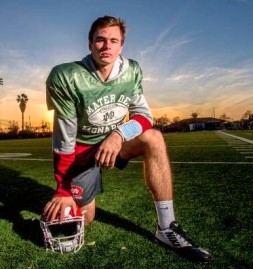 some adaptation from PAC-12 preview

There are always plenty of five-stars living it up in Hotel Southern California, but deciding on a new quarterback at USC seems akin to premier night in Hollywood.  Like, spotlights and hoopla and national attention.  Or like the peculiar and shallow hand-wringing that precedes announcement of the prom king.  It comes with shimmering lights,  pink champagne on ice, and Tiffany-twisted’s Mercedes bends [sic] and her pretty, pretty boys she calls friends.

This year’s pageant doesn’t disappoint.  In fact, it’s become rather a 10-star spectacle because it showcases five star Matt Fink, a dual-threat sophomore and five-star Jack Sears, a strong-armed freshman.

But wait.  This is the land of glamoppulence so why stop there?  Enter J.T. Daniels, a 2019 recruit who reclassified himself to 2018 just so USC could peacock a 15-star extravaganza.  He also has been named the starter for the Trojans.

Poor Clay.  Remember the last time coach Helton had to find a starting quarterback?  How slow the Trojans started and how they dropped and, oh my, that first game against Alabama—ouch!

Granted, it couldn’t have happened to a nicer guy but that’s the point—it has been happening to the nice-guy and, judging by the loss on Saturday to Stanford, the quarterback dilemma hasn’t stopped.   J.T. Daniels has started two games and completed less than 54% of his passes while throwing nearly 3% interceptions.

Are those really the “numbers” of a starter at USC?

The decisions of Clay at the qb position are critical because USC will need all of the offense it can get to counter the Trojans’ habit of giving up big plays on defense.  Yes, Troy has unstoppable Cameron Smith at linebacker and the emergence of Jack Jones who, last season, had four interceptions, seven pass break-ups, 40 tackles and a Grammy recording back in 1962.  But even those were not enough to prevent Troy from giving up 13 plays over 40 yards.

Last weekend, turnovers continued the same as before and the offense was awful.  In fact, the three point total earned against Stanford was the lowest points for USC since 1997.

We watched the quarterback battle with fascination all summer and it was clear that all three candidates drip with ability.   But, even after all of that sweet summer sweat and two games, we’re still wondering if Clay has the right quarterback or if he will ever solve the turnover problem.