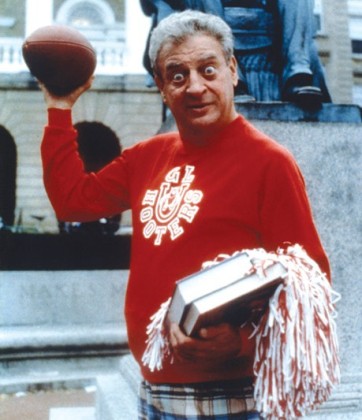 It’s too early to make much of national statistics, but it’s not too early to see who is getting respect and who is deserving of some Rodney Dangerfield recognition.

You remember Rodney.  He’s the guy who told us, “I don’t get no respect! My psychiatrist told me I’m going crazy. I told him, ‘If you don’t mind, I’d like a second opinion.’ He said, ‘All right. You’re ugly too!’.”

The cool thing is that there are plenty of candidates!

You know you’re in Dangerfield country when, after just three games, your punter already has 1000 yards. That’s how things are for coach Lane Kiffin at Florida Atlantic.

You might be in for a Dangerfield if your name is Trevor Lawrence and you’re the star-darling quarterback for Clemson but you’re currently second in the nation for throwing the most interceptions.

There are some candidates that we’ve already eliminated like — remember FAU’s 1000 yards of punting?  Well that punter, Matt Hayball, is so foolhardy and myopic that he’s averaging over 42 yards.  Sorry Matt.  That just won’t cut it.

And, you can imagine our disappointment with Wisconsin running back Jonathan Taylor who is averaging 24 points per game [yes- twenty four] and the Badger defense which is so selfish it’s not allowing opponents more than 116 yards per game.

We’re very close to disqualifying Oregon‘s Jevon Holland because he is headed for a season with 588 yards —in punt returns.

Even with those candidates eliminated, we’re still polishing up some golden Dangerfields for people like the nation’s top analysts who said the Atlantic Coast Conference would be better and more competitive than last year.  Unfortunately, the ACC is not only the lowest-ranked Power Five conference, but there are two mid-majors in between the ACC and the others.

Hawai’i is a rising star on our Dangerfield list!  We are simply gushing over the Rainbows and their generous work of giving the ball back to their opponents! Imagine doing that 11 times in just three games!

Benevolence is often a good thing.  Not so much in college football.

Rodney had a great deal of experience with misplaced benevolence so let’s take a look at what he had to say:

One night I came home, I figured I let my wife come on. I’ll play it cool. Let her make the first move. She went to Florida.

I met the surgeon general. He offered me a cigarette.

At Christmas time, we couldn’t afford tinsel so we just waited til grandpa sneezed.

Should any of you feel slighted because you don’t see your favorites on our list, please be patient.  There’s still plenty of time remaining for your team to screw things up!