For more than two years, Arizona State administrators have told us that the hiring of Herm Edwards and the installation of an NFL-style program will not only work, but it will change college football.  Some even doubled-down and tripled-down and whatever comes after that.  (Sorry.  I went to public schools.) 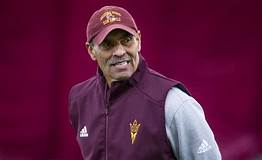 Like desert storms that are common in Tempe, thunder makes all of the noise but it’s lightning that does all of the work.  Without lightning, nothing actually changes.

Our quest today is to see if the Tempe tempest has just been a lot of noise or if there have actually been any bolts of progress.

In his two seasons at Arizona State, Edwards has won 15 games.  In the two seasons before, the Sun Devils won 11.  Although that hardly qualifies as lightning, it doesn’t miss by much when we note that eight wins last season is more than any ASU team since 2014 and it was accomplished with pure freshman quarterback Jayden Daniels.

In Herm’s first season in Tempe, we heard the noise of sports analysts who raved that Edwards had reduced the defensive points-per-game by seven.  Yet, with a little digging, we can see that the year before he arrived, ASU’s defense had also dropped seven points from the year before.  In 2019, it dropped again but by only three points.

Forced into a change of defensive coordinators, Edwards hired Tony White from San Diego State to continue ASU’s 3-3-5 scheme. But White left after a few weeks and Edwards decided to elevate two position coaches to co-coordinators.

With all of the changes, Edwards had four defensive coordinators in less than three months.

The new guys are an odd pair because one is Marvin Lewis, long time head coach of the Cincinnati Bengals and the other is Antonio Pierce, a high school head coach with no head coaching or coordinating experience at the college level. Together, they abandoned the 3-3-5 and installed a 4-3 during Spring drills.

Switching to 4-3 might not be a bad thing since Edwards developed a reputation in the NFL as somewhat of a maestro of the 4-3, Cover 2, but this change came suddenly and seems to have caught analysts by surprise, especially those in the Valley of the Sun.

Clearly, ASU’s 2019 offense atrophied under Edwards and he now faces the 2020 season without his NFL-drafted running back and NFL-drafted wide receiver. He also has to find playmakers and depth for his offensive line which performed poorly, hasn’t been recruited well, and will now rely on three transfers.

It’s only fair to acknowledge that he had a great number of injuries and it was his first season without the wizardry of quarterback Manny Wilkins.

To solve things, Edwards hired Zak Hill from Boise State. Even if Hill’s offense at BSU was only mediocre (46th) against a Mid Major schedule, he is considered an expert when it comes to developing quarterbacks.

Indeed, Herm is a lightning bolt all by himself.  He is a bold leader with great character and his charismatic personality causes most people to like him and hope that he does well.

I have become one of those so I don’t want to cast long shadows.  But if we don’t look into his past to get clues to the Sun Devils’ future, then we’re probably dabbling in an over-smack of irresponsible myopia.

In his first two years as an NFL coach for the New York Jets, Edwards won 59% of his games.   In his first two seasons at ASU, he has won 58%.  Over all he was 54-74 in the NFL.  He’s always started with two winning seasons and left with losing ones thereafter.

At first, Edwards was heralded as a creative defensive-minded coach in the NFL.  However, it seemed that his NFL creativity morphed into confusion and it caused commentators to wonder what scheme he was running while others wondered if he actually had a defensive philosophy at all.

His NFL offenses were worse.  They eroded with time and were often called too timid and his play calling too conservative.  After leaving the Jets, he took the head coaching job at Kansas City where his offenses started okay but then fell off each season until the Chiefs produced just 127 yards in one game, the worst offensive production in 22 years for KC.  To make matters worse, that game came after his chiefs lost a franchise-record 12 straight games.

Herm Edwards smiles when reminded of those tough years.  He’ll tell you that those were decades ago and he’s grown with time.  He also won’t mind pointing to the other side of his NFL career, one in which he played cornerback for the Philadelphia Eagles and still holds the second-best record for interceptions in team history.  He played in Super Bowl XV and in nine seasons with the Eagles, he never missed a single game.

Although there have been sparks in the desert, the question is if they will fan into flames in 2020 or beyond.

Wins will flare in 2020 but they might be more mirage than manifestation.

Here’s what I mean.

Five of ASU’s first six games are at home. Four are against non-bowl opponents.  Three road games (Washington State, Colorado, and Arizona) are winnable because that is the weakest road-game trio in the PAC-12.  November opens against three straight bowl opponents but two of those are at home (Cal and Utah).

I think fans expect Arizona State to win at least five of those first six, all three of the “trio”, and get at least one of the November home opponents.  If so, ASU will be 9-3 and nationally ranked.

But, doesn’t it seem to you that Arizona State should win nine games with a schedule like that?  If so, then nine wins might be thunder-worthy but not all that lightning-worthy.

There is another area in which we might find some ominous rumblings and that is in his recruiting.

Every recruiting cycle since Edwards arrived has been better than the one before and if his current class holds, it will be the first time in years that ASU has had a recruiting class finish in the top 25.

Because he was a defensive back in the NFL, Edwards draws defensive players like a magnet, much like Kirk Firentz draws cornerbacks to Iowa.  In the 2020 class, Edwards signed four, four-star defenders and that kind of recruiting hasn’t been seen in Tempe for a long time.

So maybe these recruiting classes are the thunder-rumbles omen.  Maybe they’re telling us that the Sun Devil program is about to become perennial contenders for the PAC-12 South championship.

—- The Savvy Index has predicted college football games with 77% accuracy since 2014.
—- Each week, the Index lists the top 25 teams in its rankings.
—- Commentaries on games and notable activities of various teams appear routinely throughout the year.
—- Interviews with notable football broadcasters and personalities along with feature stories from Savvy Game Line have been used by other publications.