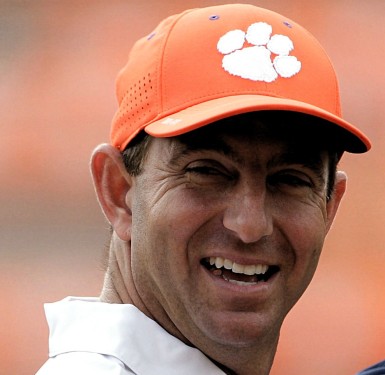 As we grind our way toward preseason rankings for all FBS teams, we have come to the important review of coaches.  There is generally little change in Savvy’s projections for coaches who remain in the same place from year-to-year, so most of the fun stuff happens in the teams that change coaches.

In last month’s review of each team’s returning roster production, I had the system funnel things down to a 1-5 value so that we didn’t have to deal with thousands of pieces of data.  For this preview of head coaches, I’ve asked Savvy to produce 1-9 values for the grid that follows.

Savvy’s projections are not intended to say that one coach is better than another.  Instead, it is more of how strong each coach’s resume’ is for his time in FBS.  Therefore, a rising star like Cincinnati’s Luke Fickell may be every bit as good as Nick Saban but Fickell hasn’t been a FBS head coach long enough to build Saban’s resume’.

That accrued data is combined with an evaluation of various trends and the result is a prevision that, in very general terms, answers this question:

You may have already come to another important question—like, how can any system accurately project the effectiveness of someone who has never been an FBS head coach before?

Actually over the years, I’ve discovered that many keys exist, they’re abundant, and they’re reliable.  Anytime a new one is uncovered, it’s like finding hidden treasure and I confess that the fun of that has made this pursuit somewhat of a guilty pleasure.

There are some oddities of note.  For example, if we converted Les Myles’ data from LSU into this simplified 1-9 discussion, he would likely rate an “8”.  But, he is starting at “6” mostly because he has been out of the game for a long time and because—well—he’s at Kansas now.

I was surprised to see Kevin Sumlin (Arizona) with the biggest drop in the over all (detailed) data.  Although Sumlin is a highly-admired coach, some of his trend lines bent sharply downward last season, a situation that now puts him squarely in the center of coaches we will be watching in 2019.

In the grid below, teams that have new coaches have colored highlights in the column labeled “here since”.  Those with coaches who have never head coached an FBS program are shaded in pink.